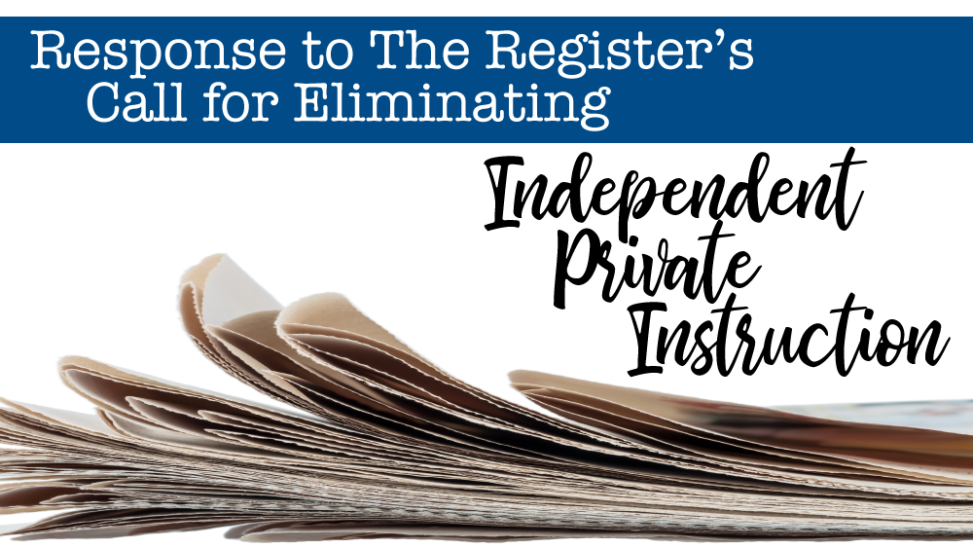 Independent Private Instruction (IPI) is – and should remain – a viable educational option in Iowa.

Homeschool Iowa stands in direct opposition to a March 7th Des Moines Register editorial, which attempted to use unsupported, misleading arguments to call for the elimination of IPI.

According to The Register, “Iowa's independent private instruction option can leave youth...at risk of abuse.”

There has been, however,
no correlation found between
Independent Private Instruction
and increased rates of child abuse or death.

In March of 2018, researcher Brian Ray, PhD, released a comprehensive study on these issues, available on the National Home Education Research Institute website.

In fact, this data clearly indicates that preschool-age children (not homeschooled children of compulsory school attendance age) are, by far, the highest risk group for abuse fatalities.

“Infants and toddlers are at high risk of an abuse or neglect fatality compared to other age groups. They require special attention.” – CECANF final report

Yes, opponents of home education have been quick to call for increased government oversight of homeschooling families following the tragic abuse fatalities sited by The Register.

Yet, in both of these cases, government child protective services were already involved but failed to prevent the deaths.

These cases were heart-breaking examples of a statement in the Executive Summary by the Commission to Eliminate Child Abuse and Neglect Fatalities:

“Many children who have died from abuse or neglect were known to CPS agencies that did not take adequate action to ensure the children’s safety.” CECANF Final Report, page 14, 2016

Homeschool Iowa is already on record
supporting research-based efforts
(none of which include the elimination of IPI)
to reduce these tragic fatalities.
Read more here.

This opinion, however, is only supported by unsubstantiated and provocative rhetorical statements.

The Register claims: “An entire science education can consist of watching insects mate. Counting seven pencils could meet the obligation to teach math. A child may never learn the alphabet, let alone how to read.”

Instead of basing their opinions upon unconfirmed hypotheticals, we invite The Register’s editorial staff to attend our Homeschool Iowa Graduation, where authentic homeschooling parents award high school diplomas and where actual homeschooled student accomplishments and future plans are showcased.

Rather than reasoning from unsubstantiated conjectures, we invite The Register’s editorial staff to read about real homeschool graduates, like Dr. Elizabeth Cook, whose story was highlighted recently in our Homeschool Iowa blog.

If The Register's editorial staff
would like actual research facts about home education,
they are readily available.

If they're pressed for time,
they can check
Homeschool Fast Facts .

Iowans support opinions based upon facts and evidence.

Homeschool Iowa shares The Register’s desire for quality education for our children and for effective measures to reduce tragic childhood abuse and fatalities.

We, however, believe that parents have the God-given right and calling to raise their children and that IPI should remain as a recognized, proven Iowa educational option.

Homeschool Iowa also supports research-based means to reduce childhood abuse and fatalities – none of which include the elimination of Independent Private Instruction.

We call upon The Register to join us in basing its opinions upon these facts.

One Comment on “Response to The Register on IPI”