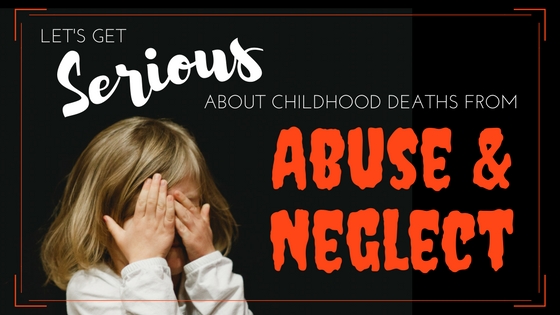 Child abuse and homeschooling have been hot topics due to several recent highly-publicized, heart-rending cases. What are the facts? Some have advocated for restrictions on homeschooling – including regular "safety and welfare checks" of all homeschooled children. Are these measures warranted?

Between 4 and 8 children experience tragic deaths in America every day from child abuse and neglect according to the federal Commission to Eliminate Child Abuse and Neglect Fatalities (CECANF).

The U .S. Congress created and funded CECANF to analyze this critical problem like never before, on a national scale, and to come up with effective solutions.

After 2 years of intensive study, holding nationwide hearings with top experts and investigating the issue on an unprecedented scale, CECANF determined the best way to reduce deaths was to focus efforts on well-documented risk factors.

Homeschooling was not identified as a risk factor.

CECANF reported that the single strongest predictor of a child's potential risk for injury death is a prior report to social services. Children for whom such a report has been filed are 5.8 times more likely to die from intentional injuries.

--In Wichita, Kansas, an intolerable upswing in child deaths galvanized the community to action. Data showed that most deaths came from specific zip codes. In response, extra energy and resources were devoted to those zip code areas, with eventually over 60 community organizations combining efforts to help. As a result, in 2011, 2012, and 2013, there were no maltreatment deaths. (Pages 70-73 of CECANF's report)

Child abuse is an intensely emotional subject, as it should be. But, emotions provide a poor foundation for solutions.

Effective responses are based upon well-documented facts.

Wichita and Hillsborough did not base their response plans on emotional appeals, grand-standing, scapegoating, or fault finding. Nor did they create divisions within their communities.

They started with a solid foundation of facts. This allowed them to create common-sense plans that saved lives.

In the recent highly-publicized abuse cases involving Iowa families who were said to be homeschooling, the families had been the subjects of multiple prior reports of concern. Yet these cases did not receive the kind of extra attention and resources that saved children’s lives in Hillsborough and Wichita.

This is a crucial time, when caring people are spurred to action to prevent future deaths from abuse and neglect. Directing energy and resources at the choice to homeschool—as though this were a risk factor—does a terrible disservice to children who are at serious risk of abuse and neglect right now.

Those who attempt to link child abuse and homeschooling without factual evidence need to re-examine this crucial issue.

All Iowans who sincerely want to reduce child abuse and neglect deaths should urge policymakers to start with the risk factors that CECANF identified, and to build a strategy from there.