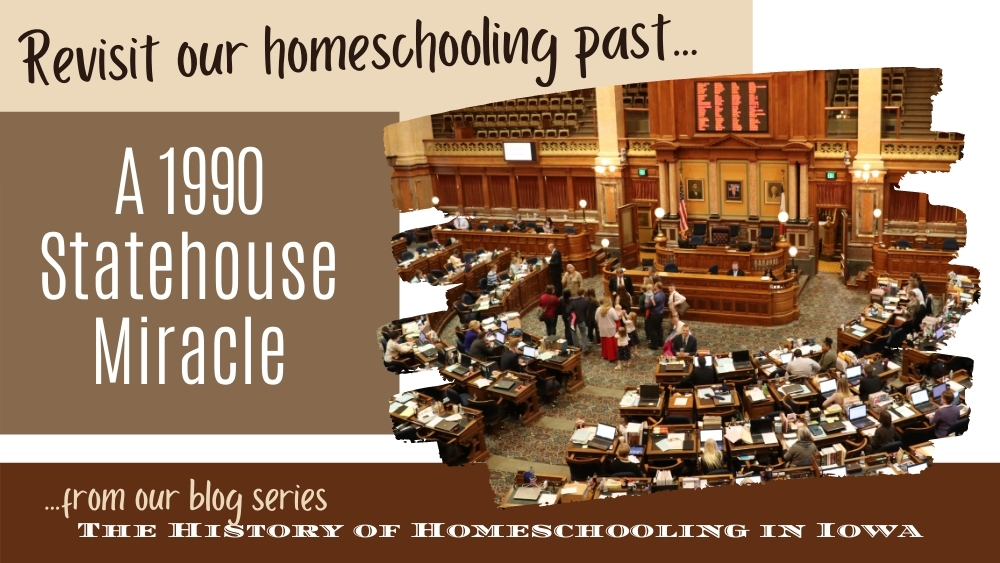 History of homeschooling in Iowa includes a miraculous account of a pivotal incident that occurred in the Iowa Statehouse in 1990.

Parents in Iowa can homeschool their children with relative freedom today.

Was that always the case?
The answer is: “No.”

How was the recognition of the freedom to homeschool won in our state?
The answer is: “Through the diligent efforts of dedicated parents.”

There are literally hundreds of stories to document those efforts, but we’re launching our new blog series, "The History of Homeschooling in Iowa" with this narrative: A 1990 Statehouse Miracle.

Our Story Actually Begins in the Late 1980s

At that time, Iowa law did not recognize private instruction by persons other than Iowa licensed teachers.

Even so, a number of Iowa parents had been homeschooling . Several faced prosecution and possible removal of their children under Child In Need of Assistance (CINA) threats.

In 1989, the Iowa Senate passed Senate File 149. This bill was labeled as a truancy prevention measure.

A prominent homeschool leader at that time described the bill differently:

“[SF 149] allows and compels the county attorney to go directly to juvenile court and file a petition to remove truant children under the Child in Need of Assistance portion of the Iowa Code."

"This bill would lower the compulsory attendance age to six (6) and raise it to eighteen (18). We have very strong evidence that anti-homeschool intent was at the origin of this bill.”

Home educators raised objections to the bill, and, by God’s grace, the 1989 Iowa Legislature adjourned without passing SF 149.

Unfortunately, the bill was still eligible for consideration by the 1990 legislature – at the very point to which it had progressed at the end of the 1989 session.

As the 1990 legislative session neared, homeschoolers began to prepare.

On January 6, 1990, before the legislative session opened, they invited their legislators to a group member’s Adel home.

Keep in mind that most of the families in this group were educating their children in a manner outside of the legally recognized means in Iowa at that time. 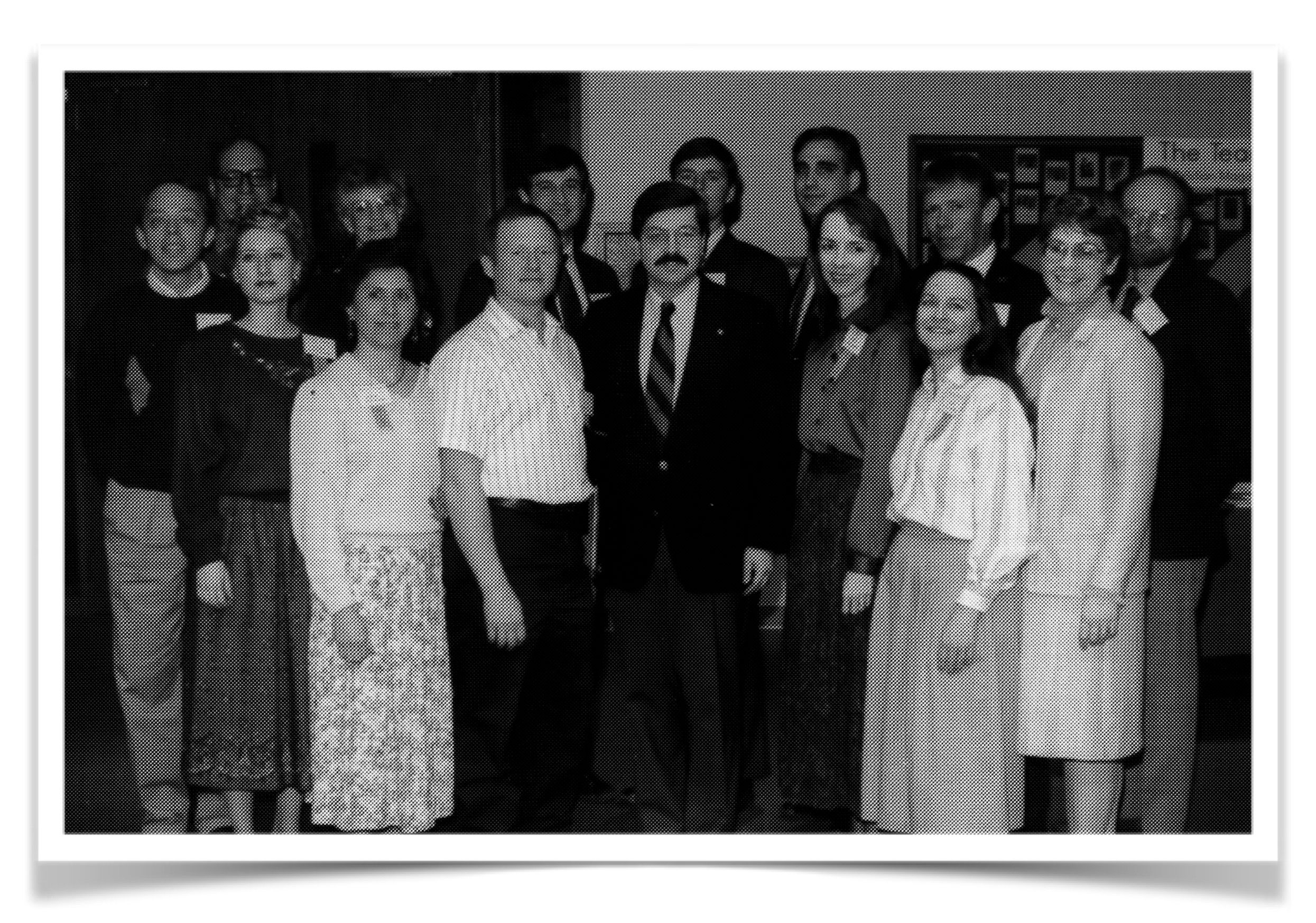 The NICHE (Homeschool Iowa) Board photographed in 1993 with Governor Branstad. Ten board members in this photo were among the Dallas County Support Group members who met with their legislators in January of 1990.

A Meeting Held and a Connection Formed

Was this meeting and the communications that followed it an insignificant event for the history of homeschooling in Iowa?

Judge for yourself as you continue to read this account.

In the period leading up to the 1990 Iowa Legislative Session, the Iowa Department of Education presented conditions it wanted included in a homeschooling bill.

The Iowa insert to The Teaching Home magazine [Dec/Jan 1989-90] reported that the 1990 Iowa Legislature would open Monday, January 8, and that the Department of Education planned to propose new homeschooling legislation (dubbed “The Governor’s Bill”).

This bill was to be “a compromise position acceptable to the State Board of Education,” according to Kathy Collins, the Department of Education legal consultant.

In the opening days of the 1990 Legislative Session, SF 149, the so-called truancy bill approved by the Senate in 1989, was quickly approved by the House of Representatives with some changes included.

Its next destination was to be a conference committee charged with ironing out the differences between the two chambers.

Homeschool families, including many of the Dallas County Homeschool Support Group members, frequented the Statehouse, talked to their legislators and watched for the convening of this committee.

In the Waiting Room

Days – and then weeks – passed. It appeared that differences between the two chambers  (such as the setting of the compulsory attendance age and deciding whether to attach the Governor’s Bill to SF 149) were stalling the process.

By mid-March, the constant monitoring for the convening of the SF 149 Conference Committee had begun to take its toll on the homeschool legislative watch volunteers.

However, a homeschool-supportive House Republican offered to help. He would alert homeschooling families tracking the legislation if he saw any signs that the Conference Committee members might be meeting.

There were a few false alarms, but this approach gave another level of security to those monitoring activities at the Statehouse.

Finally, during the waning hours of the 1990 legislative session, a call came from the homeschool-friendly legislator.

The SF 149 Conference Committee was going to meet immediately.

Within fifteen minutes, several dozen homeschoolers located the tiny room where the Committee had convened and squeezed in to observe the process.

With impressive efficiency, the Conference Committee hammered out differences. They filed their finished product – a combination truancy bill and homeschooling bill – on April 6, 1990.

Although some parts of this legislation closely resemble our current Iowa homeschooling law, in contained a number of troubling provisions, including:

A New Version of SF 149 on the Fast Track

The circumstances appeared grim, at best.

Homeschoolers packed the Senate chamber balcony in silence to watch the proceedings. The floor debate commenced. Well-worn statements, both pro and con, were presented.

Then, a quite unexpected thing happened.

Yes, this was the same Senator Riordan who had been invited to a meeting of the Dallas County Homeschool Support Group just months earlier!

Because he was aware that this bill would adversely affect the homeschooling families he had come to know personally in his district.

He had come to know and respect these parents who were faithfully petitioning the legislature for protection for their families.

Senator Riordan declared that home educators should have the freedom based upon the Constitution to practice their beliefs.

He announced that he would vote against SF 149.

(Senator Riordan later noted that several Democrat Party leaders rebuked him for his speech and vote.)

Following Senator Riordan’s remarks, several other senators spoke in defense of the right to homeschool from a Constitutional perspective.

Senator Tom Mann, the only African-American in the Senate at that time, also a Democrat, passionately  championed homeschooling based upon his deep commitment to human and civil rights.

At last, it came time for the final vote.

Homeschoolers in the Senate gallery were praying fervently.

The votes were tallied and displayed: 25 for the motion to approve the bill, and 24 against.

Homeschoolers in the gallery gasped as they sensed defeat.

Yet God was Not Finished

One Republican Senator, Paul Pate, had not been present for the vote.

The Democrat Senate leaders left the voting open for 45 minutes, attempting to find the Senator so he could cast his vote.

If he voted for the motion, it would pass by a majority of the Senate.

If he voted against the motion, a tie would result, which could be decided by the vote of Lieutenant Governor Jo Ann Zimmerman, a Democrat.

By God’s grace, Senator Pate did not arrive in time.

The voting was closed and the bill had been stalled.

The homeschoolers in the Senate gallery evacuated to the rotunda to rejoice and scan the vote tally.

By God’s grace, many unexpected votes were noted.

There were hugs and tears of joy.

Even so, several dozen committed homeschooling parents remained in the Capitol building as the Legislature continued meeting through the night.

They stayed to make sure that the SF 149 language was not amended into a last-minute appropriations bill.

The next morning, the 1990 Legislature adjourned.

Weary homeschool parents returned to their homes with thankful hearts and renewed hopes.

A much-needed grace period had been created in which further work could be done.

In 1991, the bill creating the foundations for our current Iowa homeschool law was enacted.

It did not include many of the objectionable terms in the 1990 SF 149 bill.

What Can You Learn from This?

The history of homeschooling in Iowa demonstrates
the strength of home educators who join together.

It illustrates how personal contacts with our elected officials
can be used by God to accomplish great things.

Stay connected with a local support group
and with Homeschool Iowa, your state organization.

Sign up for our free VoterVoice advocacy tool
to reach out to those who represent you.

Make a commitment to stand for homeschooling freedom! 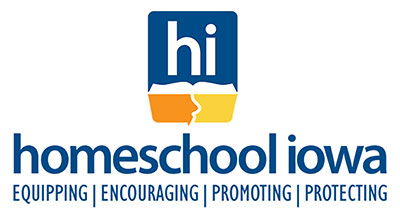 2 Comments on “History of Homeschooling in Iowa: A 1990 Statehouse Miracle”